Welcome to the Dragonwell family, Terry! So glad it’s finally out so I can read it! 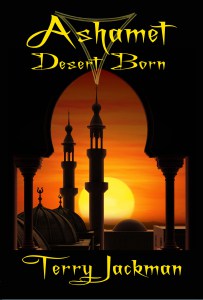 Dragonwell Publishing is thrilled to announce the upcoming release of Ashamet, Desert Born, by Terry Jackman, and with it its beautiful cover!

“Headstrong was the least I knew they said about me. Unpredictable, a wicked sense of humour? Gods, I hoped so.”

A desert world. A population of 100 males to every female. And for Ashamet, its prince, a suddenly uncertain future…

All Ashamet wants is the warrior life he already has. But then a divine symbol appears on his arm, closely followed by an attempt on his life. Now nothing’s simple any longer, even less so when a new and very foreign slave seems shocked by both his new surroundings – and his master’s amorous attentions.

Could this innocent young male hold the key to Ashamet’s survival? And to his heart?

“Ashamet, Desert Born”, is a debut adventure fantasy with an exotic…