It has been a busy month!

Spent two weeks last month in Barbados, and I have more traveling in my future this month. Not that I’m complaining. I mean, flying is not my favourite thing, but I love to travel. The world is such a big, interesting place with lots to see and people to meet. But I like to be on the ground as soon as possible.

I finished my big edit last week and sent the manuscript off the publisher. As it happens, a lot of published writers chose that time to blog about the whole period between editing and the release of your book, how it feels and what you should expect and do. Some good stuff there, but nothing I didn’t already know. Nervous? Check. Excited? Check. Convinced your book is crap and now the world gets to laugh at it? Double Check. Convinced your book will be an instant bestseller and that the movie offers will come in thick and fast? Well…it’s a dream every author with a book out there has, isn’t it?

Just watched another episode of the new BBC Sherlock Holmes last night–the one with Irene Adler. I didn’t get the way they chose to go with the character, but I did enjoy the story, once I reminded myself it’s a modern interpretation after all. I do wish modern writers of Irene would get that although Sherlock claims that she’s such a woman, she would be the only one he would even consider marrying, he’s actually a man who has no interest in marriage or sex–even with Irene–anymore than she has with him. Irene beats him with her mind, not her wiles. And she did it so well that one story was enough to make her an indelible part of the entire canon. All the modern versions seem to think that the sexiness is key, but really, the sexiness was the beautiful wrapping of a keen mind. I do object to the BBC ending–why does Sherlock have to win? Is it even Irene if she loses to him? For me, what made her stand out in the series is that she beat him. Very few can claim that.

Frankly, though, I’m more accepting of Steven Moffat’s version than the vulnerable pretty girl messenger Guy Ritchie turned her into. At least in the BBC version, the actress was mesmerizing and smart, but honestly, you need that if you’re going to stand next to Benedict Cumberbatch. He should just be Sherlock until they’re ready to retire it for the next few decades, and by that I mean he should be ALL versions. 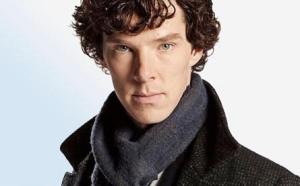 Hmmm…feel free to come investigate me any time, my dear Benedict.

Seriously, why people watch Elementary at all, I don’t get. Jonny Lee Miller is no version of Sherlock I can accept. I have read every single Sherlock Holmes story there is in the original run, and I was okay with every interpretation on film, except Elementary and (sorry!) Robert Downey Jr. However, at least with Robert, you can buy the charisma and intelligence, and they did throw in the boxing. Plus, he’s Ironman. That’s a cool factor you cannot ignore. Jonny to me only carries the addict part. He looks so young, I just want to take him to bed and feed him chicken soup while reading to him from Green Eggs and Ham. He just doesn’t have the acting chops to begin to convince me he’s this complex, mysterious, scathing, cruel, bored, incredible focused, sexless creature of logic and social incompetence.

I do like Lucy Lui as Watson though. I’ll give it that.

In any case, if you haven’t seen the BBC version yet, I recommend Netflix and be quick about it. Then go back and watch Elementary. Then tell me I’m wrong and you wouldn’t rather see Benedict naked than Jonny. Not that that’s the criteria for a good Sherlock, but you know, in this modern day, why not, right?